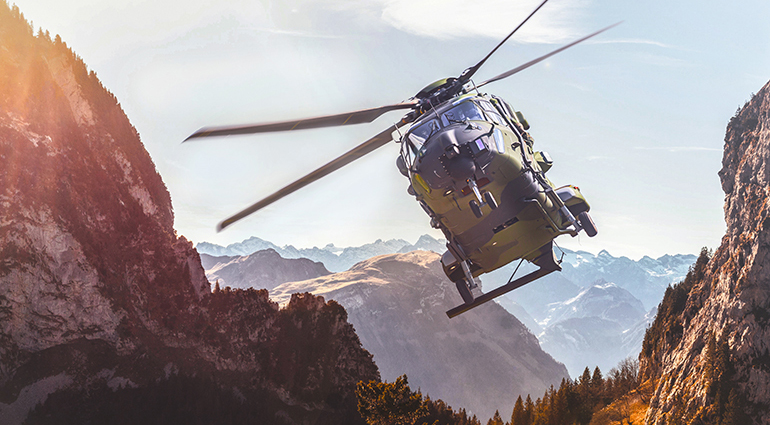 After serving his country for two decades as a helicopter pilot, James returned home to serve his community as a teacher. But he missed helicopters, so he took a job flying medical evacuations for a local hospital. He flew until late in his life.

Now it was time to say goodbye to him. As friends, family, and uniformed co-workers stood vigil at the cemetery, a colleague called in one last mission over the radio. Soon the distinctive sound of rotors beating the air could be heard. A helicopter circled over the memorial garden, hovered briefly to pay its respects, then headed back to the hospital. Not even the military personnel who were present could hold back the tears.

When King Saul and his son Jonathan were killed in battle, David wrote an elegy for the ages called “the lament of the bow” (2 Samuel 1:18). “A gazelle lies slain on your heights,” he sang. “How the mighty have fallen!” (v. 19). Jonathan was David’s closest friend and brother-in-arms. And although David and Saul had been enemies, David honored them both. “Weep for Saul,” he wrote. “I grieve for you, Jonathan my brother” (vv. 24, 26).

Even the best goodbyes are oh-so-difficult. But for those who trust in the Lord, the memory is much more sweet than bitter, for it is never forever. How good it is when we can honor those who have served others!

Lord, we thank You for those who serve their communities as First Responders. We humbly ask You for their safety.

We honor the Creator when we honor the memory of those who honored Him.

By Tim Gustafson | See Other Authors

Second Samuel 1:19–27 combines personal and communal grief. Jonathan’s death was not just a loss for David personally, but along with Jonathan’s father, King Saul, a loss to the entire nation (vv. 19, 17). Although Saul had tried to kill David, David invited the nation to grieve the loss of their king (v. 24).

How can mourning with a community, instead of alone, bring greater healing during grief?